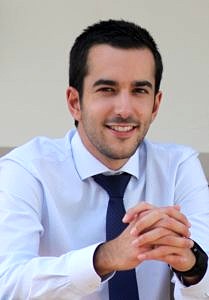 Jaime León González is research associate at the Chair of International Business and Society Relations with focus on Latin America since October 2018.

Previously, he was a lecturer for business Spanish at the University of Bayreuth. Mr. León completed a Licenciatura (5-year degree) in business administration at the University of Cordoba in Spain with a one-year abroad at the FAU. He holds an MA in Technical Translation in Economics from the International University Menendez Pelayo in Santander in Spain. He is currently a PhD Candidate at the chair on German foreign policy towards Latin America.

Final Thesis: Supervisor of Bachelor and Master thesis (in German, English and Spanish).

Learning Agreements: Contact person for all students whose last names begin with the letters M to Z.

Jean Monnet Project: The reconfigiuration of the EU presence in Latin America (since Oct. 20)

Member of the academic staff of the Jean-Monnet-Project “The reconfiguration of the EU presence in Latin America (EUinLAC)”, funded by the EU.

International developments in the 21st century – Where does Latin America stand in World Politics?– (Sep. 19 – Aug. 19)

About 200 years after the beginning of their independence process, the states of Latin America appear to be facing another step of emancipation. After a century of political and economic dominance by the United States, they are increasingly self-confident. This course sheds light on the new international position of Latin America. The focus lies on international, regional and economic cooperation.